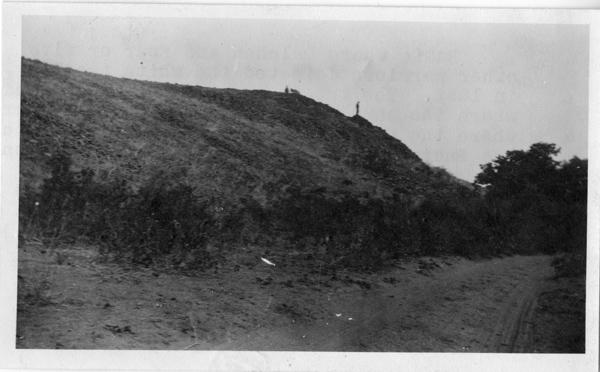 Butte, Battle of Toppenish: This looks to be the foothills coming off the western slopes of the Cascades south of Mt. Adams near the location of Fort Simcoe, near White Swan, Washington. Vivian Adams, Yakama

The "aboriginal territory" of the Yakama Nation once included the lands up towards Wenatchee, over to Cowlitz along Randle, Packwood, Mt. Adams, down to Trout Lake, Klickitat, Glenwood, Goldendale, Biggs Junction, Oregon and The Dalles, Oregon.  Yakamas salmon fished along the big river where Stevenson, Lyle, and White Salmon are located.

Several tribes and bands who were joined together to live on the Yakama Reservation, used the Oregon side of the Columbia River as their home base also.  Small towns like Arlington, Bickleton, Rock Creek, and Roosevelt were a part of the natural harvest for the southern Plateau people.

The eastern lands towards Vantage, Priest Rapids, by Hanford, Sunnyside, Prosser, Grandview, Granger and Zillah were once villages used by the Plateau people.  Many still live at these areas, but many have moved to their allotted lands also.  Vivian Adams, Yakama

The lands in this image look to be near the foothills coming off the high mountain area leading up towards Mt. Adams.  The area was called Toppenish, actually a Sahaptin word meaning a rockslide hill, so Toppenish describes the location near what is now named White Swan.

Fort Simcoe was the military base in this area until it became the boarding school for local reservation Indian children.  It also served as the first Indian agency for the Yakama Reservation and was later moved about twenty miles east but kept the Toppenish name and a small city of white people was built there.  Toppenish is today the location of the Yakama Nation tribal headquarters.  Vivian Adams, Yakama

The Yakama Nation signed over to the whiteman a little more than 10 million acres for white settlement.  These lands were once the paths followed by several Plateau tribes and bands.  The Yakama Nation Library has maps that show the area once traveled since the Animal People were their teachers in gathering, and what remains of the lands they now use in the reservation.   Vivian Adams, Yakama

In Washington Territory Issac Stevens, who governed the area, was in a rush to get the Indians moved out of the way for white settlement.  A hurried treaty route was made with indicriminate picking of Indian headmen from throughout many of the tribes who lived and used the Columbia River Plateau basin.

There is a good book of sketches of tribal leaders made by Gustof Sohon, an Army contracted artist who accompanied the white treaty negotiators to Walla Walla where the meeting was held.

The U.S. government agreed that by signing the treaty, Indians would be assured of always having access to their "usual and accustomed" gathering areas..."until the mountains crumble, the rivers run dry or the sun ceases to shine..."  Words to that effect which have, since that time, had to be proven over and over again in the whiteman's court even though tribal leaders made their mark on the whiteman's paper called a treaty.

Corruption and neglect are rampant in today's "trust" care of the whiteman to their red brothers.  Billions of dollars of Indian individual land  and tribal  resource use have been mismanaged, embazzled or lost.  The U.S. courts are still trying to decide if they should give back a few million to the Indians to make up for thier mismanagement and neglect.  Vivian Adams, Yakama

Yakama Reservation encompasses approximately 1.1 million acres of lowland and high mountain are up to Mt. Adams.  Over 10 million acres of lands that since time immemorial, used to be traveled by Plateau people during the seasonal round of gathering.

In order to bring the Indians into what the white people considered a civilized manner of living, property ownership-- like the whites sought-- was the way to change the people.

It had all started with white people advocating for a better lifestyle for the Indians.  Some groups of white people had noticed the corruption and neglected treaty promises of government officials and lobbied for Indian land ownership as a way to more quickly assimilate the Indians to the white man's economy.

A law name The Dawes Act was passed and enrollment ledgers of families and children began to be assigned acreage within the reservation boundaries if they were deemed competent.  Vivian Adams, Yakama

The ceded lands handed over to the state of Washington can be called "lost."  Where once several tribes and bands were free to move following the seasonal growth and meet again to share their gatherings at extended family homes was a cultural tradition lost forever.

The great Celilo Falls on the mighty Columbia River, called "the big river," (Nch i Wana,) by many tribes who have lived along its tributaries and shores for millenium, was flooded over in 1957 to address progress.  Salmon was greatly depleted and fishing sites were taken over by private white land owners.

Trade sites along the Columbia River and some interior sites were lost forever by white settlement.  Indians could no longer have access to the places they lived while the salmon were running, nor could they hunt in the vast mountain lands and foothills as before treaty-reservation times.

A freedom of movement was lost, even restricted.  Indians could not leave the reservation on which they were placed unless they had a slip of paper giving them permission to travel.

Favored small rivers and creek campsites where villages of tribes and bands were no longer available, all having been claimed by white settlers.

Earth lodges and semi-permanent village sites throughout the interior of Washington state were lost to white settlement.  Indians were no longer allowed to enter what was considered whiteman's property.  Stick built homes were popping up on individual allotted lands by individual families.  The extended family was made smaller through individual allotted land ownership.  Vivian Adams, Yakama

Treaty times at Walla Walla was a sad state of affairs.  My elder teacher told me that as the great Nez Perce nation came riding into the meeting, they sang a song of farewell.

There was a last salmon feast at the Celilo Falls longhouse to say goodbye to the Falls.  A ancient way of life had died with the death of an ancient force of nature and the Waashat ceremony was its final farewell.

Any changes in the lands require a prayer song of thanks and respect to that land for its use.  Today these ceremonies continue, for all manner of showing respect and giving thanks to the beings who benefit our lives.  Vivian Adams, Yakama