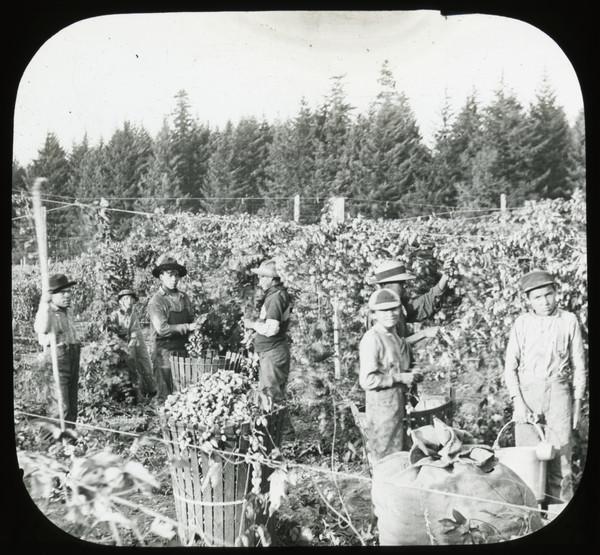 Spokanes also worked in the

Spokanes also worked in the hop fields in the Yakama area. Families would often travel together with their camp supplies in a large truck provided by the farmers to stay and work through the season.

Chemawa Picking Hops in Charles McNary Hop Yard: Hops harvesting was one of the first crops the Indians worked to earn cash in early reservation times. Farmers came to know Indian families who came back to their property annually to work the fields. It was a strange mix, an Indian family living near a whiteman's stick-built home in their tipi, living much the way they used to as they followed the season's roots and berries.Some farmers and Indian families became friendly acquaintances because of their annual close camping. Indian farmers were rare. Not very many Indian land owers tilled and planted on their lands, it was an industry that required fighting over water and it was easier to let a white man use the land, so land leases became common. Vivian Adams, Yakama

The U.S. Government first started to "christianize" the west by helping send missionaries out west to "civilize" the native people.  No white person bothered to understand that the native people of these lands they were quickly claiming for their own, lived each day with individual tribal spirituality inherent in the character of their life ways.  The Spauldings and the Whitmans were the first to influence Christianity on many of the native people in the Nez Perce, Cayuse, Palouse lands of the Plateau people.

Because of the great opportunity to spread Christianity among the heathens of the unknown west, many different Christian churches began moving west via a lottery of areas in Indian Country funded by the U.S. government.  Missionaries believed they could "tame and civilize" the indiginous population and help the government gain a hold on lands used by the native people.  Vivian Adams, Yakama

Whitman Mission near Walla Walla is historically the most well know of the Christian missions.  The native people began to mistrust these missionaries becuase of their forcefullness to convert the Indian and bringing in other white people to grab up lands once used by the Indians.  Catholic missions were also built in Plateau country and because these "black robes" learned to speak the native tongue of the Plateau people, were more readily accepted and even given small parcels of land on which to build their "mission" churches.

The Catholic belief of the body and blood of Christ was a strong point of gaining individual empowerment and assured passage to a wonderful life after death that many Plateau people readily accepted; and why not make these beliefs a part of your own ancient spiritual practices to ensure a better afterlife and build a powerbase that enhances daily life ways.

Of course, many tribes also made some Christian practices a part of their own spiritual customs in order to be allowed to keep practicing their ancient traditional ceremonies.  Vivian Adams, Yakama

Traditional "religion" in Plateau daily life was never known as "religion."  Ancient laws of thanks and respect, honor and witness to these laws handed down from the Creator have always been customary throughout the daily lives of Plateau people.  Many of these prayer songs are shared, and many are individual "property."

Many tribal libraries carry the books about Smohalla and his prophacy about the Waashut "religion."  It is also called the Seven Drums religion and nowadays, ceremonies are held every Sunday just as Christian churches hold their gatherings.  The story of Smohalla can be found at the Yakama Nation Library in Toppenish, WA; or look for the title at your local libraries.

My elder, who has been my teacher for several decades, told me there was never a word for "religion."  She said that probably a better word for Plateau beliefs would be "medicine," because that and spirituality go together in giving thanks, showing respect and healing, which covers group or individual practices.

Spirituality continues to be the "religious" force that guides daily Plateau life ways and customs.  Plateau religion is a holistic thinking and practice that involves every being, creature and human.  It is a part of our law of good stewardship for our fellow creatures and the earth from whom we receive our medicine foods, our subsistence, our lives.

All Plateau people are working hard to bring our people back to their heritage, to practice good conduct for our fellow beings and our resources.  Vivian Adams, Yakama

A more recent religious belief involves healing, righteous conduct and community service.  You can read about the origin of the Indian Shaker Church in the story of John Slocum from Mud Bay, WA.

The Shaker Church is an example of shared prayer songs and ceremonies that build strong character.  It began with powerful healing and the ability to converse with helping or harmful beings in order to bring back balance and good health to individuals.  It is a religion steeped in Christian customs, although some church members do not associate their practices with Christian churches.  Indeed, native healing practices are a large part of the Indian shaker Church practices.

A better understanding of the Indian Shaker Church can be gained by reading the book about the people who originated the church.  Check your local or tribal library for the book. Vivian Adams, Yakama

Indian boarding schools were a development of the U.S. government to "take the Indian out of the Indian."

My grandparents and parents were taught to speak, look and live like the white people who took over our ancestral lands.

The idea was to take the children away from their families, from their powerful influence of practicing traditional customs and remove them from that style of living.  Once this happened, the children would learn how to live like white people and would then become  easier to persuade to accept the ways of the Great White Father and his laws.

Some Indian families did shy away from the traditional life ways of their parents.  My grandparents rarely spoke our Sahaptin dialect to us children and my parents never spoke Sahaptin at all, and probably didn't understand the language any more because of their boarding school or public school experiences.