A photograph (lantern slide) showing the interior of the Bakery at Chemawa with workers. Circa 1909. 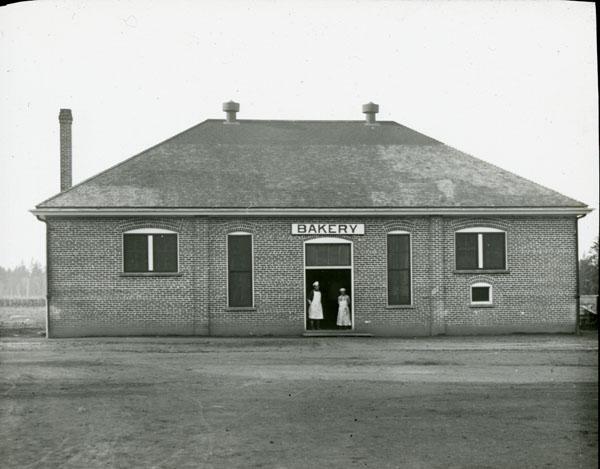 A sound file collected by Tamastslikt Cultural Institute for use in the permanent exhibits in the Boarding School era.

Percy A. Brigham was born August 12, 1910 at Hopewell, Oregon to John Henry and Mary Philomena Chalifoux Bringham. He passed away at the age of 91 in Cayuse, Oregon on September 21, 2001.

He served with the U.S. Army in New Zealand, on Guadalcanal, and New Guinea during World War II.

He had been a resident at Celiol, Cascade Locks, Arlington and then the Umatilla Indian Reservation the last 15 years of his life.

His livelihood was fishing and hunting. He fished at Celilo Falls and was one of the first five who went back to the Columbia River to fish after the inundation of Celilo Falls. He was very knowledgeable about sturgeon fishing.

Percy had an incredible knowledge of the Tribes' history and was always hungry to learn more. He shared his knowledge freely, and was a great source of information and inspiration to Tamastslikt Cultural Institute staff. Malissa Minthorn-Winks

Lots of Indian children were also sent to parochial schools where a great many abuses occurred but were never reported, covered up, and justice neglected for the Indian children who with their families, were powerless to ask for protection or receive some form of legal retribution.Many children resented being removed from their beloved families, taken away from their traditional songs and dances and forbidden to speak their native tongue and ran away, only to be returned until they were considered too unruly to stay at the school. Some Indian children found the schools to be like a home away from the reservation because they joined with other Indian orphans who had lost families to introduced diseases, or war. Vivian M. Adams

Great cultural impact happened to Indian youth during the enforced assimilation by the U.S. federal government. Boarding schools were built throughout the United States and all school-age Indian children were mandated to attend these schools. Indian families were threatened with jail if they did not abide by the federal law that "legally" removed their children (some as young as five years old) to distant boarding schools.

Some of the vocations like blacksmithing, the one my grandfather learned as a youth at one government school, quickly became obsolete during the industrial era. Indian girls were taught jobs mostly suited to maid service,field work or cooking, maintaining a household in the manner of the white woman.The purpose of these schools was to teach Indian children how to become "civilized' by taking them away from their familial ties and cultural influcences. It was during this era that the "kill the Indian, save the man," originated. This motto led to punishment for any Indian child speaking his native language or attempting to practice an ancient ceremony with a traditional song and prayer.

There were several government boarding schools located throughout the U.S. Many of them have been closed, phased out, the government calls it. Chemawa still remains in Salem, Oregon. "Indian" schools of higher education like Haskell and SIPI (Southwestern Indian Polytechnical Institute and others offer contemporary resources of higher learning and are popular choices by Indian students. Vivian M. Adams