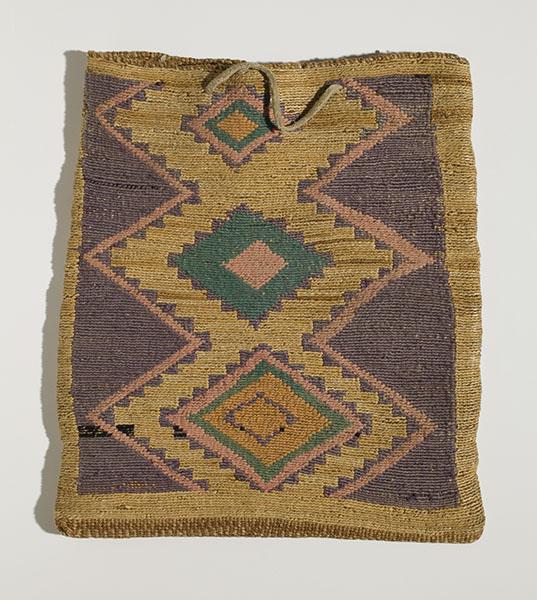 Chief Spokan Garry used this cornhusk bag to store food items and personal possessions. In 1824 at about age fourteen, he learned English, French, agriculture, and Christianity at a school near present-day Winnipeg. Returning to Spokane, he opened a tribal school and turned to farming. During 1881 treaty negotiations, he tried to protect ancestral lands near the falls, but instead, a Spokane Reservation was established near the Columbia River. Garry lost his farm to a homesteader, and moved to the wooded hills of Indian Canyon. Rectangular, flat, twined, cornhusk bag. Geometric designs in purple, teal and yellow one side and purple and teal other side. Buckskin handles. Hemp and cotton weft at top and base, balance cornhusk and wool. height: 12 3/4"; width: 11 1/4"

This was Chief Gary’s cornhusk bag from 1968. Chief Garry adopted three of his sister’s orphan sons and one of those guys See-lap. Thomas Garry, Titus Garry was the oldest, Thomas Garry then Paul Albert. Paul Albert’s son is, is the, one who married Eva Covington. Thomas married Lucy Joseph. This is where Spokane got its name. His Indian name was E-num Spoh-Khan-Ee. And they tried to spell Spoh-Khan-Ee in-in-in the English alphabet. They said it was too long so they dropped the H and an E. You know that didn’t end there either. Tacoma, was named after Ta-homa, Chief Ta-homa. Seattle was named after Chief Sealth. They tried to spell those names in the English language. They came up with Tacoma and uh, Seattle. And I’ve been asking about De-ahk-ma. De-ahk-ma is our word for Yakama. And everybody I’ve asked is just, “Oh no it’s just the name of our town.” So uh, I’ll find somebody who knows somewhere along the way, De-ahk-ma. Viola Frizzelli, Pauline Flett, Marsha Wynecoop 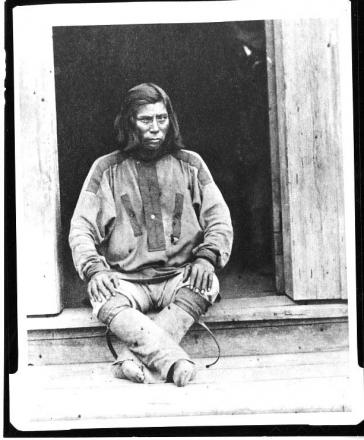