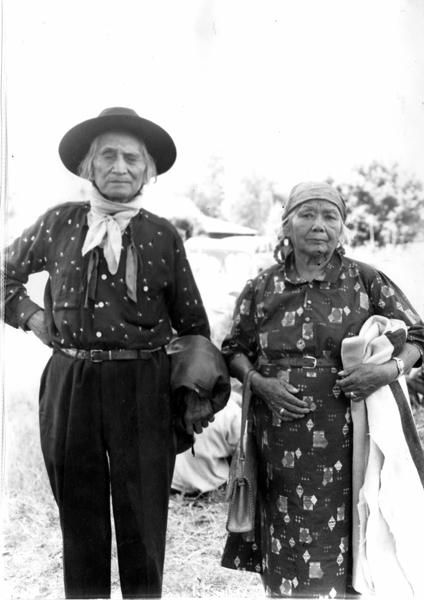 Black and white portrait of Jim James and wife

Chief Jim James was one of the last individuals to be regarded as a traditional chief. He presided at the "Ceremony of Tears" prior to the inundation of Kettle Falls in 1939 and served his people faithfully until his death in 1961.

The Sanpoil territory centers around the Sanpoil River Valley, extending north to the boundary of the current Colville Reservation. They also had some villages along the Columbia River, from Hells Canyon in the west to Rodger's Bar in the east. The Sanpoil were allowed to live in their homeland with the creation of the Colville Reservation, but they were forced to share their land with other tribes.

During the winter the largest village could be found at Whitestone where approximately 300 people lived. They lived in 30 to 40 foot long, narrow, tule mat covered structures with rounded ends or semi-subterranean circular earth lodges. During the summer, they moved to their fertile salmon fishing grounds at the mouth of the Sanpoil River, where they lived in more temporary homes. like tipis.