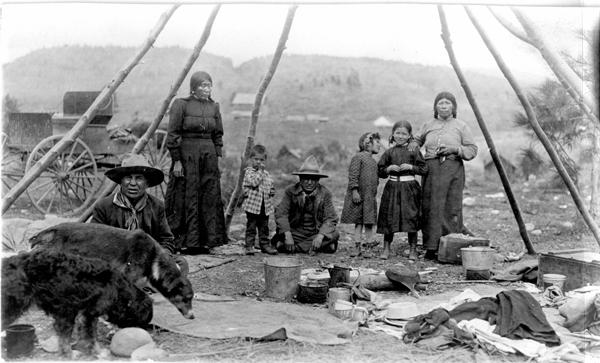 Black and white photo of Chiliwhist Jim and his family, standing under the frame of a tipi with a wagon parked in the left background.

Chief Chiliwhist Jim was a prominent medicine man and spiritual leader of the Methow people from the Malott area.

The Methow originally lived in and around the Methow River Valley. Information about the Methow is lacking because early historians often confused the Methow with other tribes in the area. David Thompson, however, briefly visited teh Methow during his travels down the Columbia in 1811. He described the Methow people that he met as friendly, he was especially taken with the shell bead adornment that the Methow women wore at the time of his visit.

Methow lands fell within the boundaries of the 1879 Moses-Columbia Reservation. With the signing of the Columbia Treaty in 1883 and this Reservation's dissolution the following year, many of the Methow moved to the Coville Reservation.