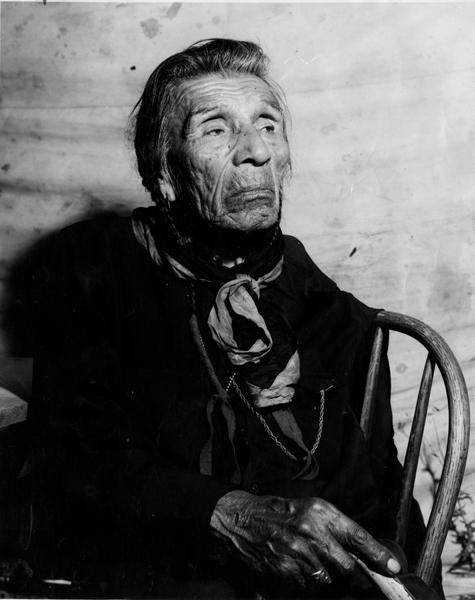 A black and white photo of Cleveland Kamiakin sitting in chair taken by Verne Ray, probably taken in the 1920's

Cleveland Kamiakin was a young man when the construction of the Grand Coulee Dam began. As a leader of his people he spoke out against the broken promises of reduced electricity rates and job opportunities for tribal members, which the US Government had made to previous tribal leaders prior to construction of the dam.

The Palus proved to be strong warriors and fought bravely against European encroachment. However, as many as three Palus members signed the Yakima Treaty of 1855 (Kamiakin, Skloom, Koo-lat-toose), agreeing to move onto the Yakima Reservation. Most Palus members refused, but European pressures eventually scattered Palus families onto the Yakima, Warm Springs, Nez Perce, Umatilla, Spokane, Coeur d'Alene, and Colville Reservations.

Palus villages consisted mainly of mat lodges and semi-subterranean houses. The villages were positioned at premier salmon fishing locations. The Palus also gathered root crops intensively and supplemented their diet by hunting antelope, deer, and waterfowl. Prior to 1850, observers noted the Palus' aptitude for agriculture, by this time they were raising cattle and growing wheat, corn, and potatoes.