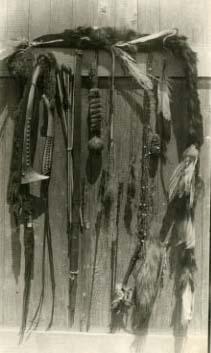 Photograph of a collection of items identified as "Indian weapons," circa 1900.

It is interesting that even

It is interesting that even though they were performing ordinary tasks the tribes felt the need to carry some form of protection. As well I never knew that decoration was a sign of power before. It would be great to have a description of the weapons/tools and each of their pupose. Jordan Jason

I was thinking the same thing

I was thinking the same thing, it would be really cool to know what each of those tools were and what they were used for.

Collection of Indian Weapons: It should be noted that "weapons" were also used for hunting and fishing, and some were dual purpose, like a horse quirt. Appearance was all, and one must look strong when monitoring lands stranger tribes may encroach upon. So it was necessary to have tools decorated for power but also served utilitarian purposes. Vivian Adams, Yakama

Although many Plateau tribes were peaceful, there were also many who were noted for their warrior like attitudes and their great horsemanship. In early reservation times many men became upset and angry with the lies, theft and mistreatment their families and friends. Most met negative or neglegent interaction with the "trustee" feds and were cheated in the new cash economy by whitemen eager for Indian lands. In the history of the Plateau people there are few instances of hostile initiation by them against the whiteman; but those that did happen quickly became recorded in history as "tragedies" or "massacres." Ironic when the majority of Plateau people had always been known as peace loving and acted forcefully only when protecting their own. Vivian Adams, Yakama