Fishing from Scaffolding at Sunnyside Dam 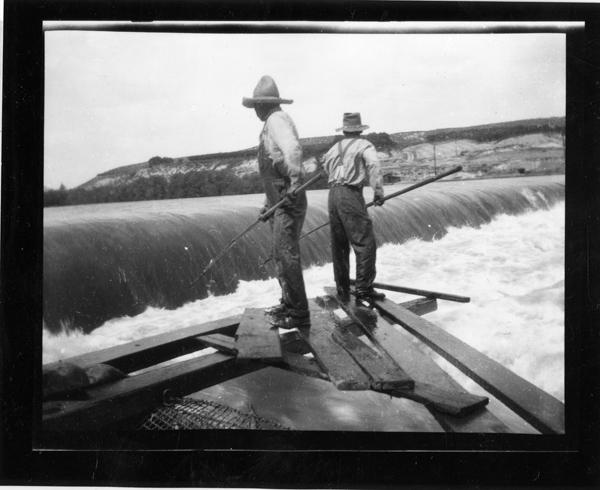 A photo of two men fishing from scaffolding at Sunnyside dam (1925). 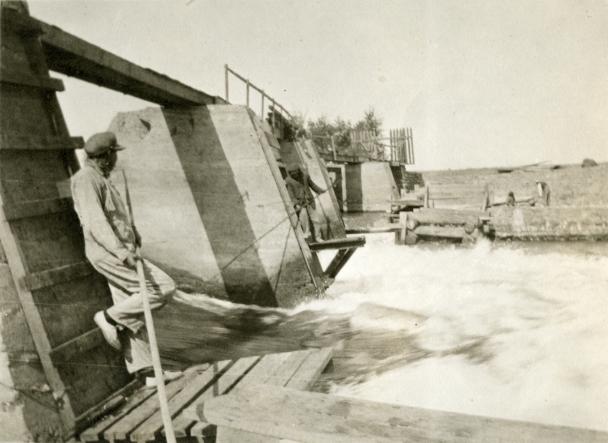 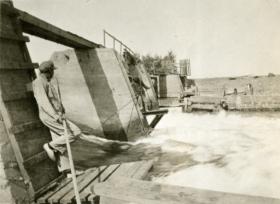 A photo of two men fishing from scaffolding at Sunnyside dam (1925).

Fishing from Scaffolding at Sunnyside Dam: These two men are fishing with hook and pole.  They are not tied down to base and the water isn't as swift as the big river.  These men have built this scaffold and continue to wait as the fish would come over the small spillway.  The steel hook that they are using is similar to ones carved from animal bone.  I've always been told you must have good balance and body strength for this type of fishing. Vivian Adams, Yakama

These men are taught that the fish nourishes us and gives up their life.  In the washat faith, Nusux (Salmon) is put on the table right after the water and before the Nukut (Deer meat).  Young fisherman learn to give thanks for catching their first salmon.

This fishing practice is often used by individuals that are trying to provide for their families.  Some men are also interested in passing this form down to their sons, grandsons, nephews, and brothers.  Without fishing most of our young men would struggle to understand the importance of this animal, the gear involved, net, hook, and religious significance.

The pole and hook in this picture would tell us that is considered modern.  Hooks from long ago were made from animals such as deer and elk.  Sinew from these animals would be used to hold the hook in place.

This area is one of the in lieu sites utilized by the Yakama people.  The Yakima river would also take you to places in Parker, Sunnyside & Prosser with scaffolds similar to these shown.

These two men may be recognized as fisherman of their longhouse and or church.  They may be gathering to use the fish for a feast, wedding, funeral, or namegiving.  These men may be known for their strong fishing skills, and are recognized among the tribal members.

Most salmon are not wild, they are bred in fish hatcheries and released into the river.  Many tribes are working towards restoring the salmon for the future.

Young fisherman always enjoy hearing of the stories of where the best fish are.  They learn that they take only what they need.  T

Salmon has always been an essential part of our daily diet.  Many parts of the fish were essential to a healthy body.  Salmon would be cooked, smoked, air dried, and dried to make ch`u lai.  Even in todays' modern world you will see that salmon is a good nutrition source.

When young men earn the right to stand among their elders of their longhouses and or church it is a huge honor.  They are recognized for their strong hunting and or fishing skills.  That they can be called upon at anytime by members for help in gathering.

Young men participate in a ceremony in which he will tell his story of how he caught his fish. A older man would ask what did he do? Did he give thanks for the fish?

If these were new fisherman, being recognized amongst their people.  Drummers would sing the songs  recognizing these men.  They would be able to stand amongst the food gatherers of their longhouse and or church.

There are many areas where history can tell its story. Fishermen and women will tell you where all the fish was once plentiful.  Areas that still exist today, Hood River, Underwood, Celilo Falls, Wishram, Klickitat, Hermiston to name a few.  History does fall within many of the other area tribes also, Umatilla, Cayuse, Walla Walla, Nez Perce, Warm Springs, etc.  Every tribe has similar legends of these areas that are passed down through the generations.