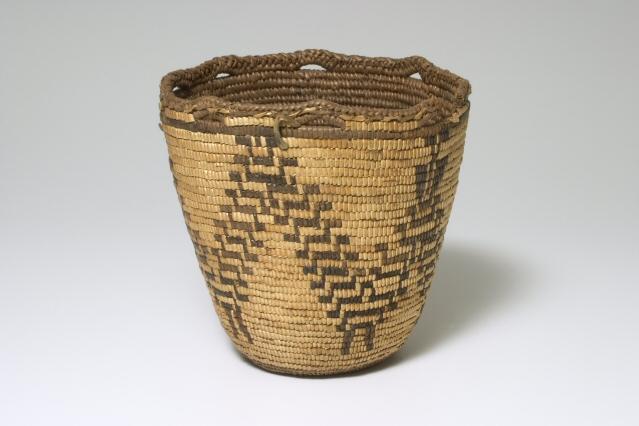 It says Klickitat maker. You know because it’s Salmon Gill and the Klickitat's are close to the water source; the big water. It could be Klickitat or you move along from Klickitat toward White Salmon. I've always been told that's like a Salmon Gill design. They started out with a dark bottom. That's their background weaving. To me, it looks like they used Beargrass and another cedar, a dark cedar, and maybe yellow cedar too. But it looks like cedar to me. Vivian Adams

It's used and it has those berry-markings inside. Those markings are just on the bottom. Because it does have a set of loops on the top, that must have been a berry basket. You pick in it and then you empty into a huge storage basket. It's tightly woven. The design looks like Quail because of how I was brought up because it’s circular and has the design. It has a geometric. A lot of that had to attribute to the area where you came from. Vivian Adams