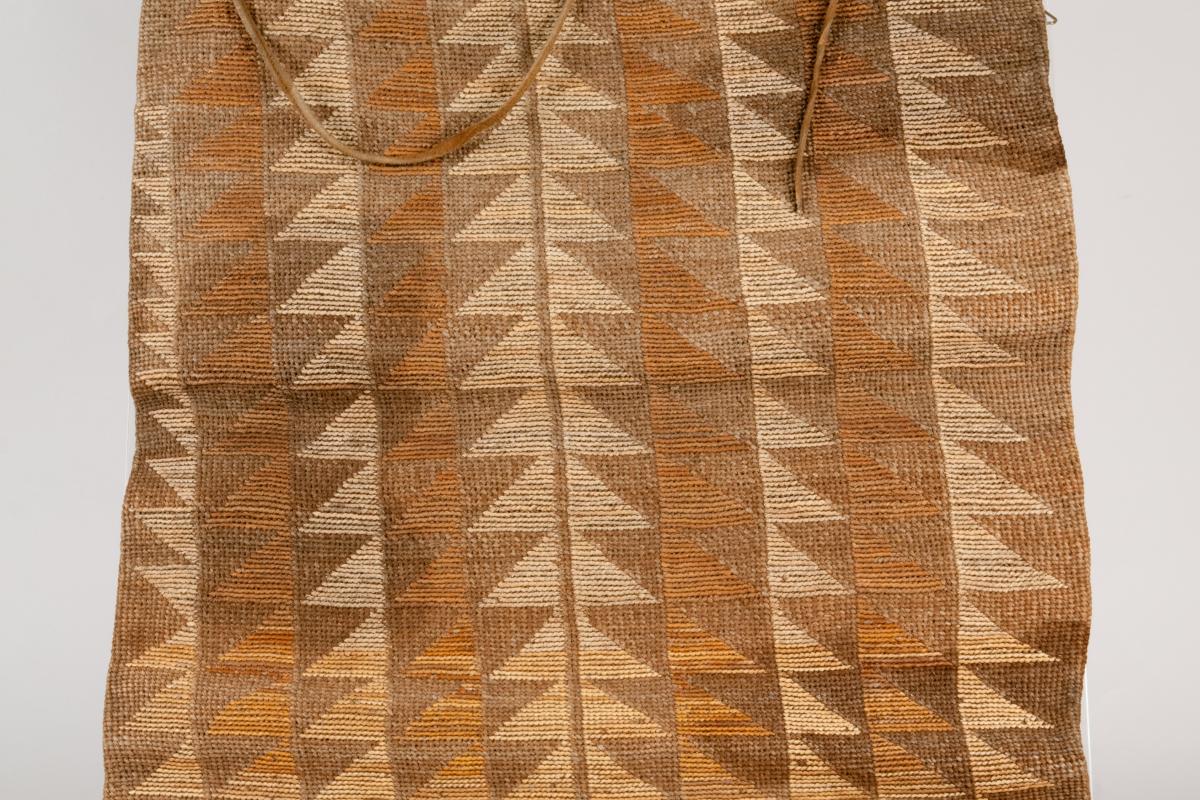 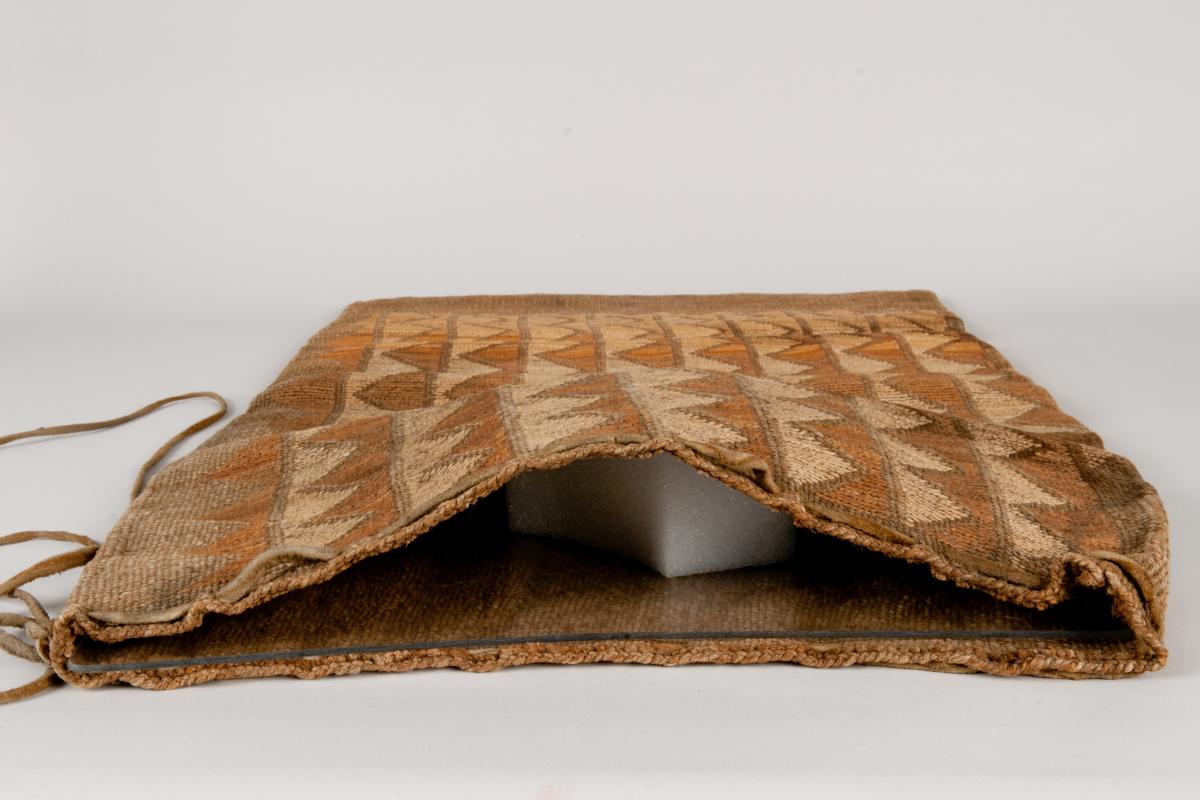 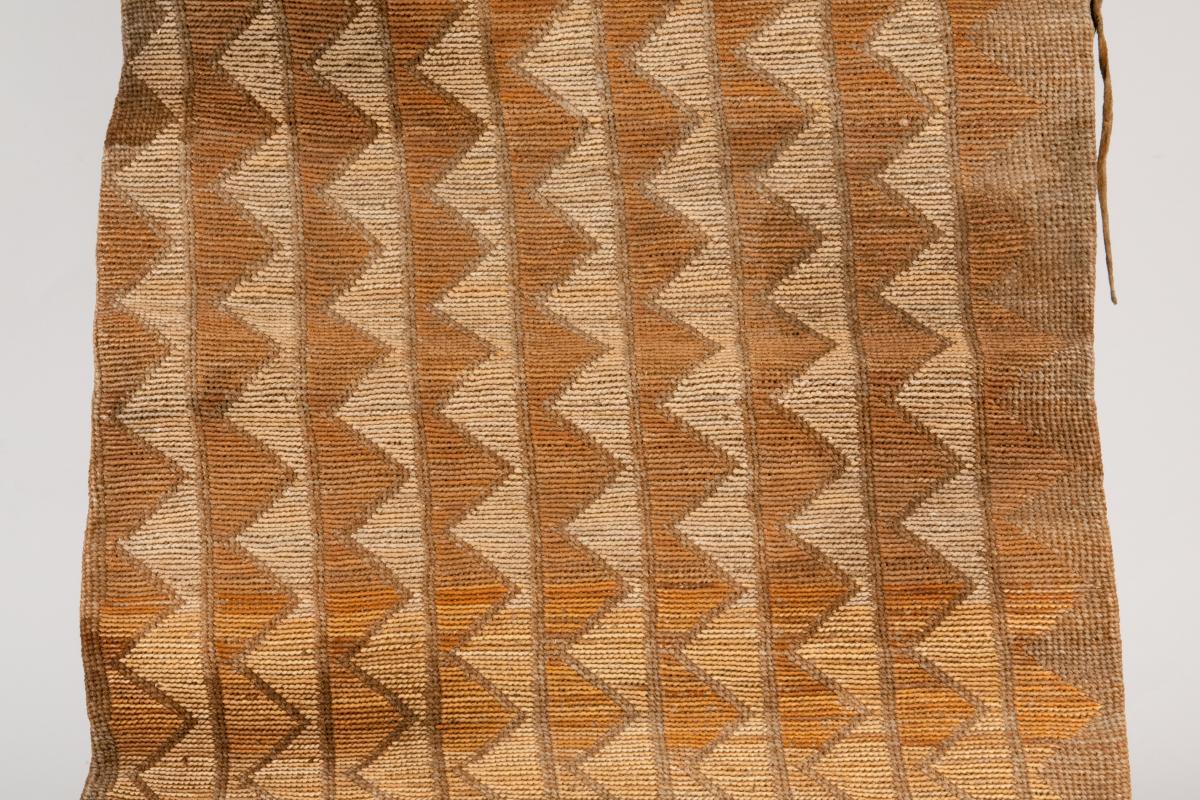 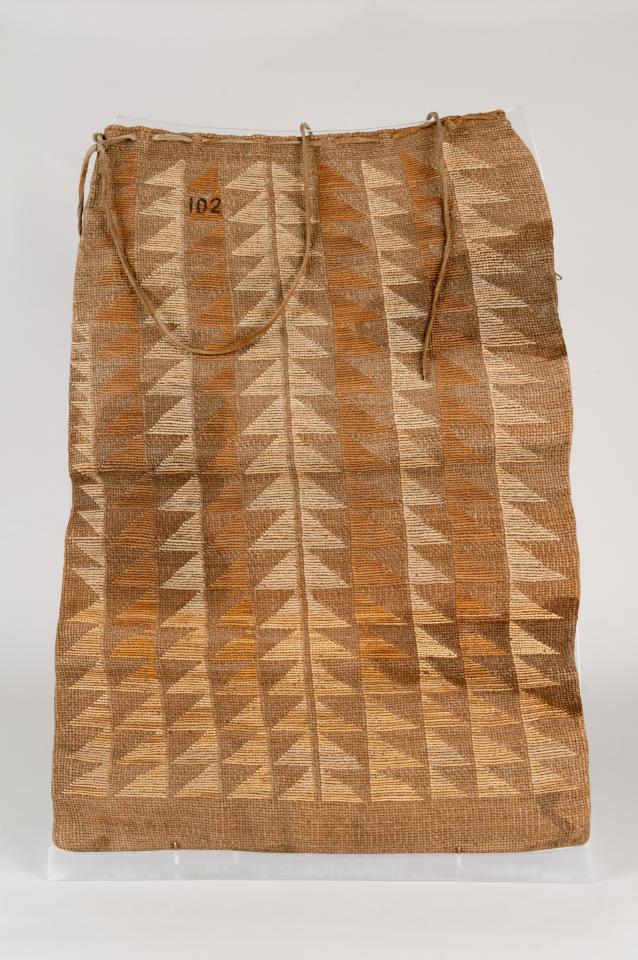 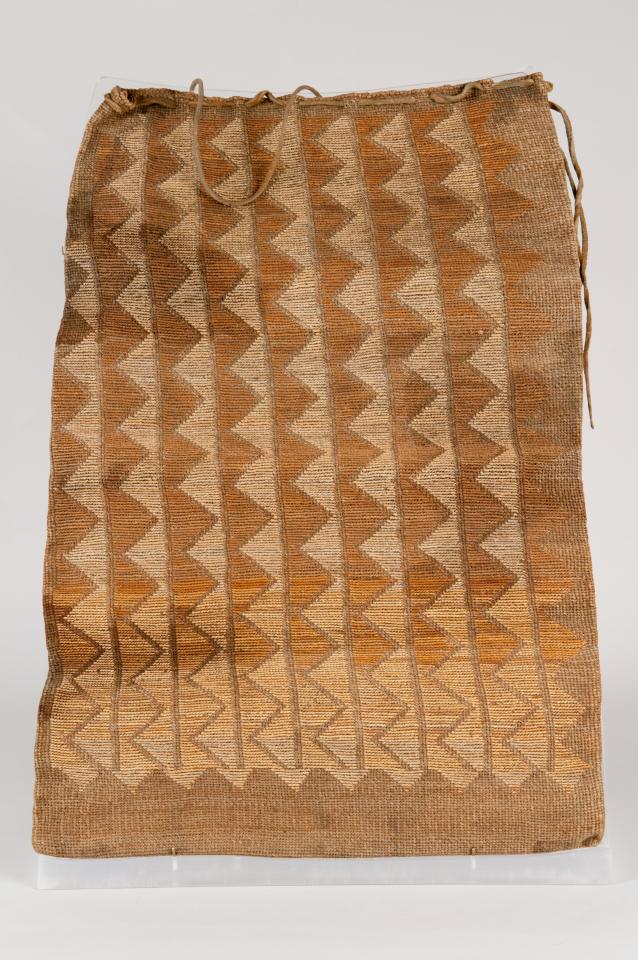 "I know that when people made these types of bags, they made them oftentimes for utilitarian type uses. But they also made them for ceremonies. And to describe those ceremonies, one might talk about like weddings. Where a wedding trade was something that was done between the family of a young man and a young woman that were coming together. And what that symbolized was that union was not just those two as a husband and wife, but it was also the union of families. Because sometimes those marriages were arranged by the family to solidify access to different resources. And thus those individuals, they were kind of almost esteemed in a different regard than the other types of unions. Because those individuals were basically living a life of servitude to their family. And oftentimes those were implemented in terms of solidification of a relationship to other families and other resources, that type of thing. But they always knew that’s what they were doing.
And so these bags were made for the express purpose of putting in dried cutmiss (camas) or dried roots, berries, that type of thing. They would be filled up and then they would be sewed along the top so that they were just bulging like that. And then they were putout as a part of that wedding trade where the families would get together and they would put out a bunch of things for the family to take. And then the other side of the family would reciprocate. And so that was called the wedding trade. And that was the thing that really solidified a union.
And of course there were the other types of union where a young man and a young woman just found themselves on their own and thus got married. But that was pretty significant. Because that’s what it did for me was when I saw that bag for the first time in reality, that’s the first thing I thought of was like wow, man, that was probably full of cutmiss (camas) at one time and just thinking about the amount of work that goes into making cutmiss (camas). I mean, you’re out there in the hot sun. You’re digging. And you’re filling up bag after bag with cutmiss (camas). And then you’re baking it for three to five days on top of that. And then you’ve got to gather the firewood, you’ve got to gather the rocks. You’ve got to put the pit together. And then you’ve got to take everything out. And then you’ve got to dry those roots for the express purpose of this ceremony that’s taking place. And then you’ve got to trek the roots to the ceremony, and then give them away to family. I mean, that’s just a tremendous journey!"

Nakia Williamson-Cloud on the continuity of the Nez Perce people and their relationship with the land:

"We can see that there’s a certain amount of continuity between the people that were living at that time. These collections probably butt up against the time of when Lewis and Clark had came through here. Some of these collections go back to probably approaching that time. We don’t really know. But so the very early collections, and you can see the continuity throughout the years of similar types of items being made and used by Nez Perce people.
And I think they’re really, you know, it’s really, I think it was a great thing for the Nez Perce people. And working with Nez Perce National Historical Park and other partners to bring together, to ensure that these remain in their, you know, even though they’re in a curated facility, they’re still in the environment which they came from. You know, the cottonwood used for the saddle frame, the rawhide, you know, everything that was used to make those items is mirrored in the landscape that we live and that they exist. And that’s important because like what our own laws say about who we are is that it’s the earth and this land that defines us. Not that we, and the non-Indian view is that, you know, is almost sometimes the complete opposite. You change everything to suit your needs. Whereas us, we, our law was this land. Our land was what we now call resources. And interacting with the land and what we now understand as resources, of course our people didn’t think about it in those terms, is how we basically, it’s what informed Nez Perce identity. And so when you look at these items, you know, it just, it’s reflective of this landscape. It’s just like similar, and it’s appropriate and it fits in our way of understanding our place in this larger landscape that our people lived.

I mean, it’s the same way in which you see that when you pick berries, you have [tuxkaty?], those imbricated cedar root baskets that we use when we pick huckleberries. Why not use just the plastic Tupperware or whatever? But you know, there’s a spiritual aspect to a lot of these things, obviously. But then you know, just in terms of the materials you think about. And I’ve heard others talk about, like in case of those. So you’ve got cedar root and you’ve got bear grass that are used to construct those materials. And those are the same sort of materials that when you go pick huckleberries, they’re in the same area. And so they go together. They’re with one another. And what lot of people, our people know, is when you put them in those baskets, that they stay fresher a lot longer. So there’s a pragmatic aspect. They stay fresher a lot longer because they’re from the same place. They’re from the same even elevation, a lot of these items. And so it allows, our people understood that that was important. Even just in terms of preservation of foods to utilize things that came from the same elevation and you know, kind of area as the resource that you’re trying to store. So our people, I think, understand the connection to the land in a very, very deep level in that way. And it was even reflected in a lot of these ethnographic items as we now understand them. Now. And then obviously there’s a spiritual aspect, component to that as well."

The decoration of the bags in the Spalding-Allen Collection reflected particular family designs. The Nez Perce employed the bags for storing edible roots or bulbs “during harvest time and for winter storage.” The bags would also be used for “ceremonial events, such as wedding trade, burials, or feast gatherings and ‘giveaways’ during memorials of a deceased member of the family village, or Tribe." Allen Slickpoo Sr. 1995