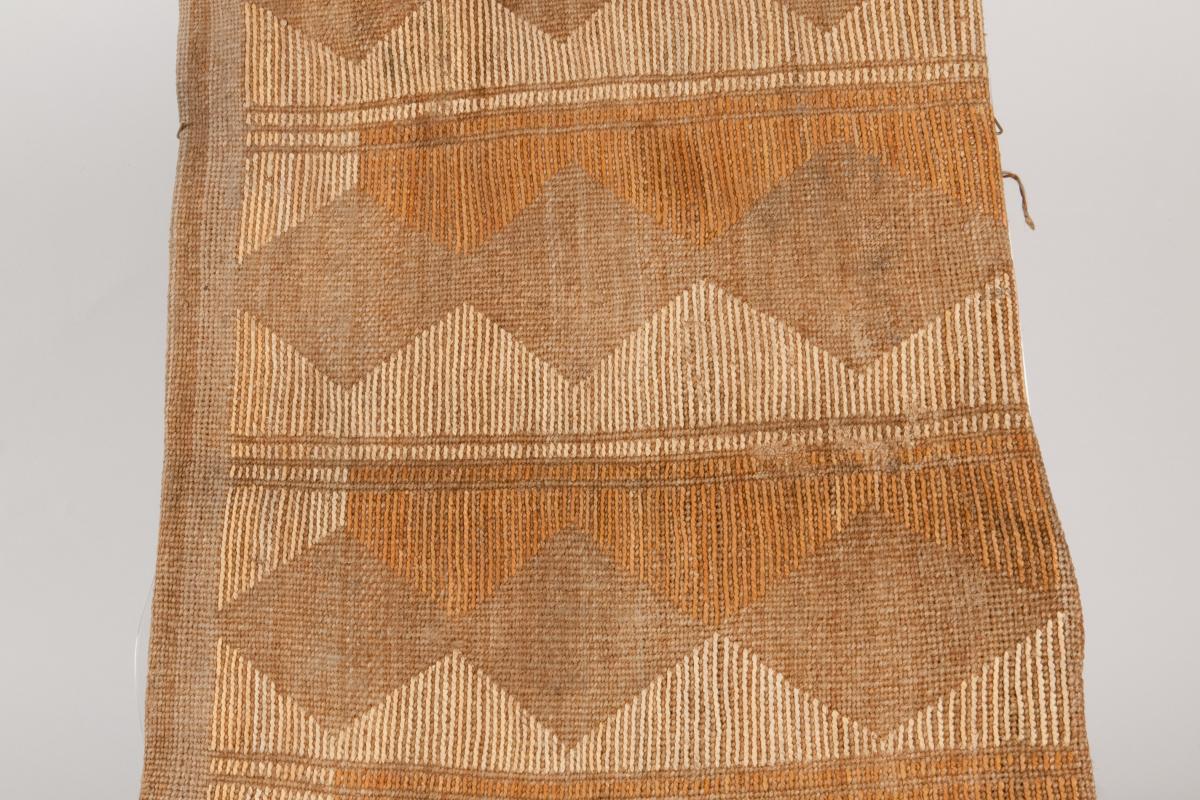 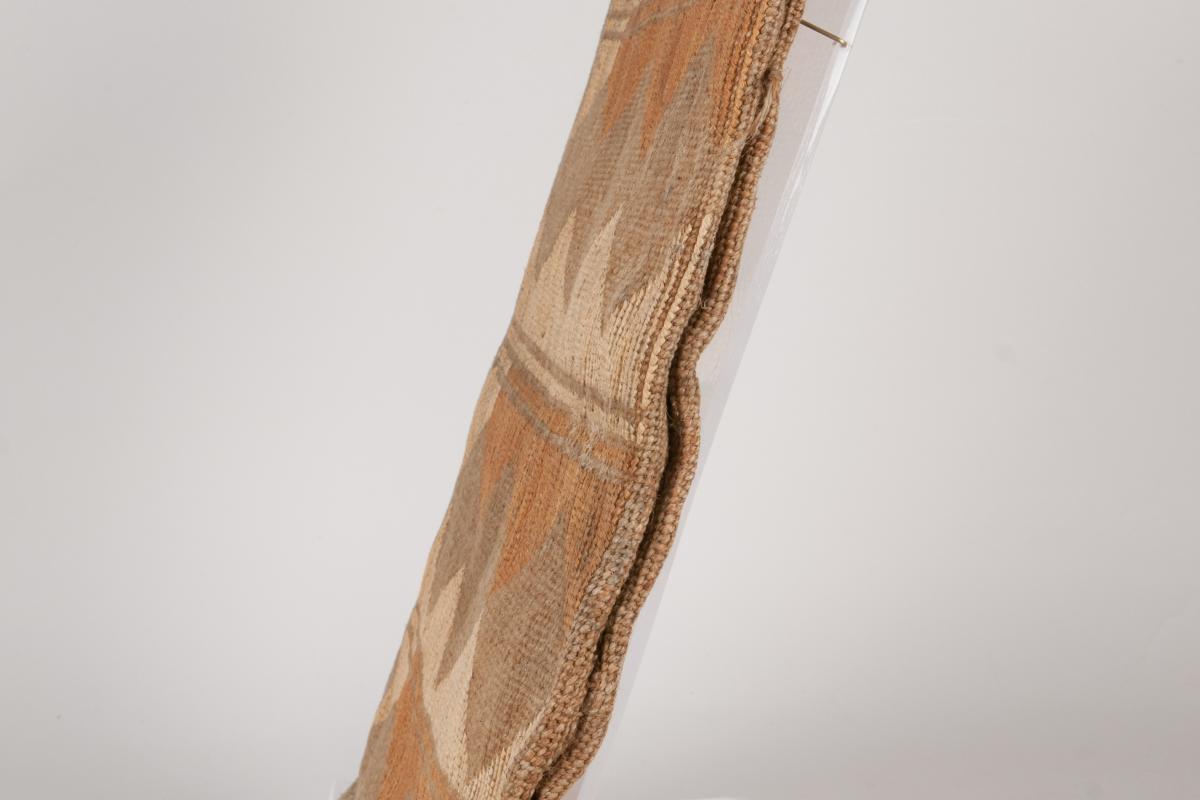 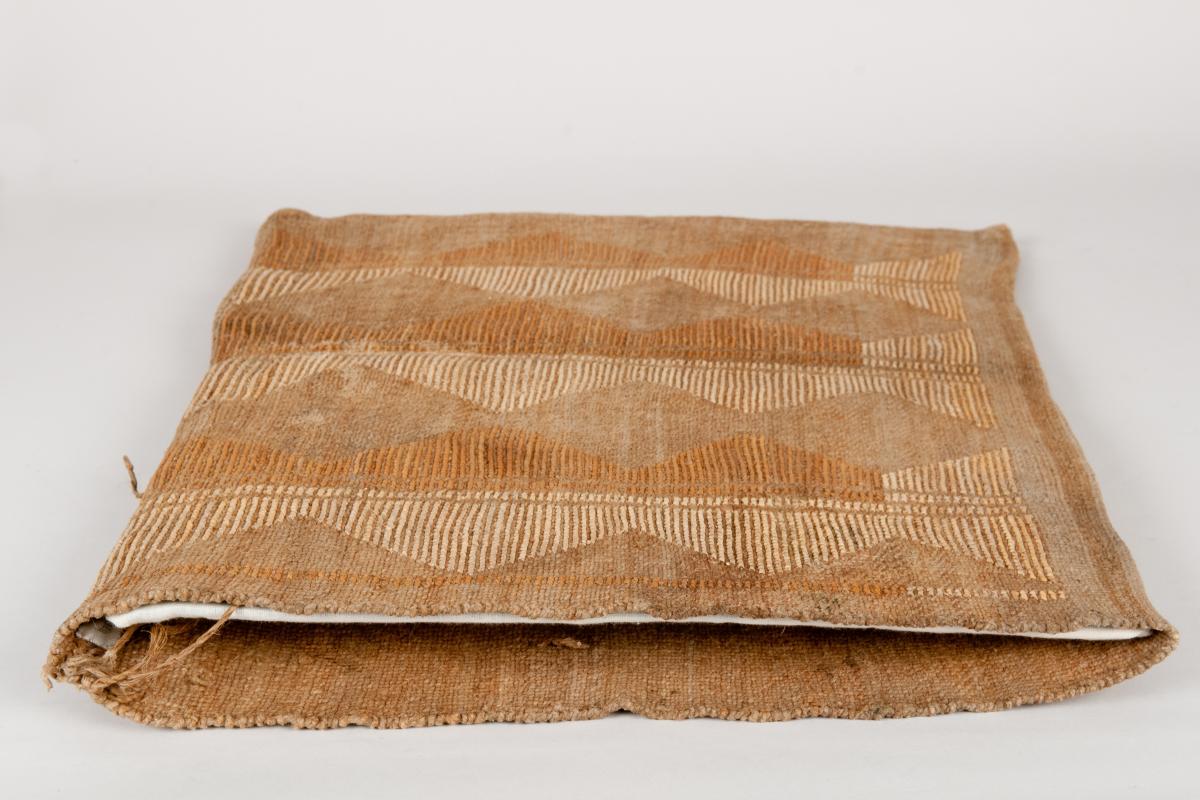 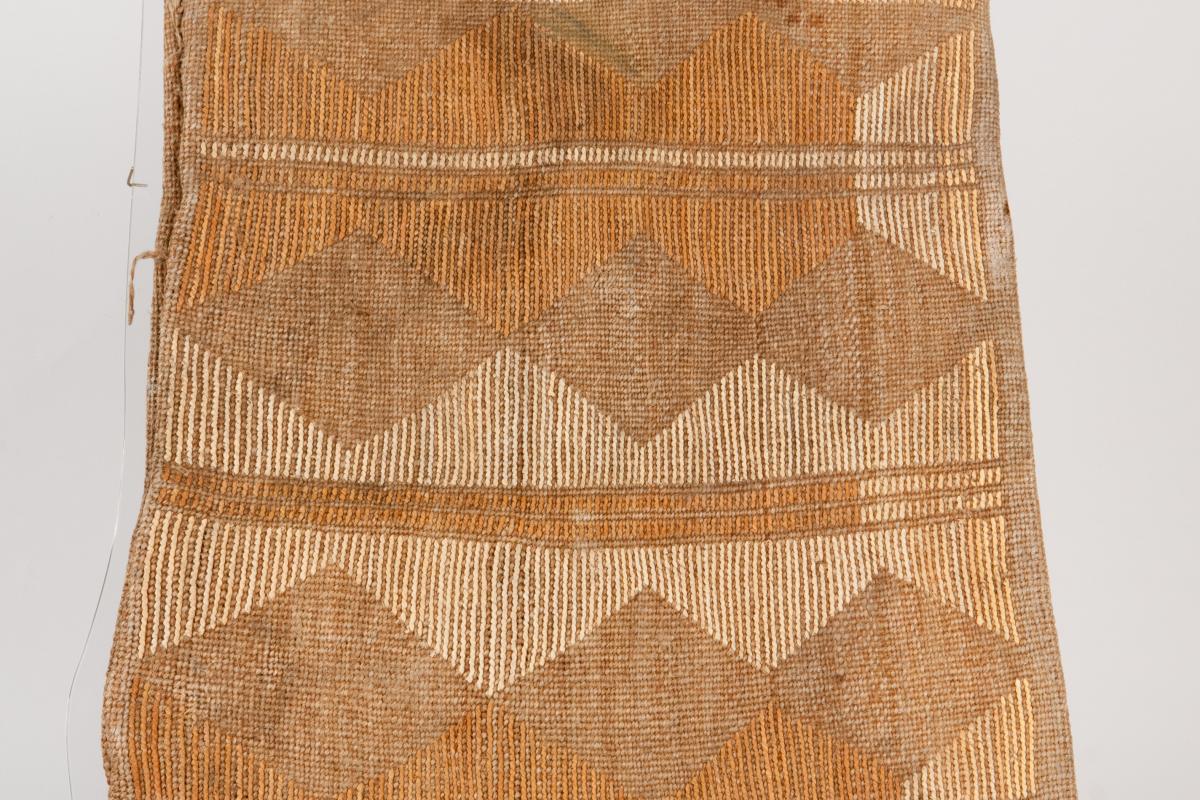 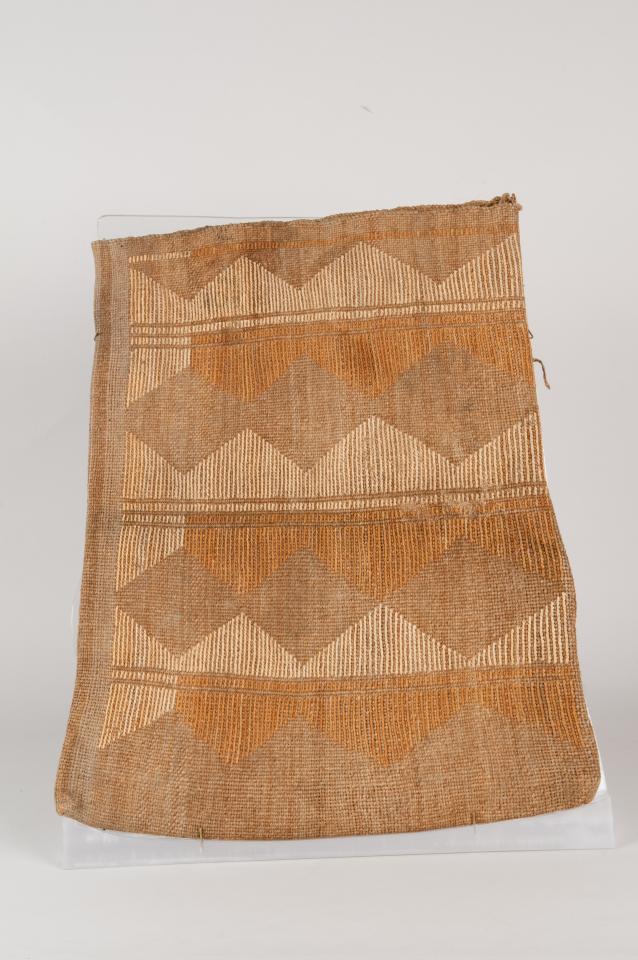 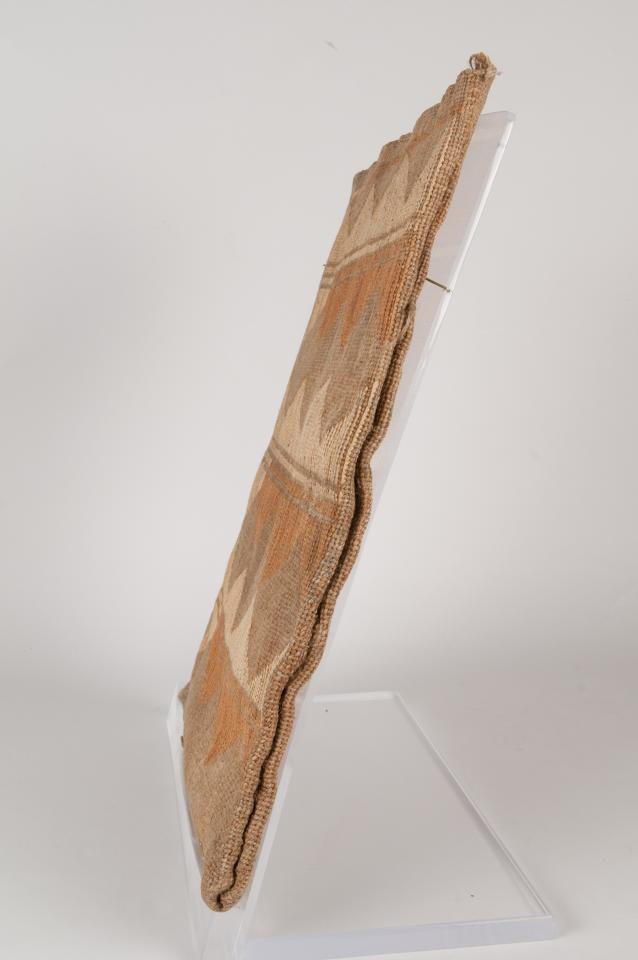 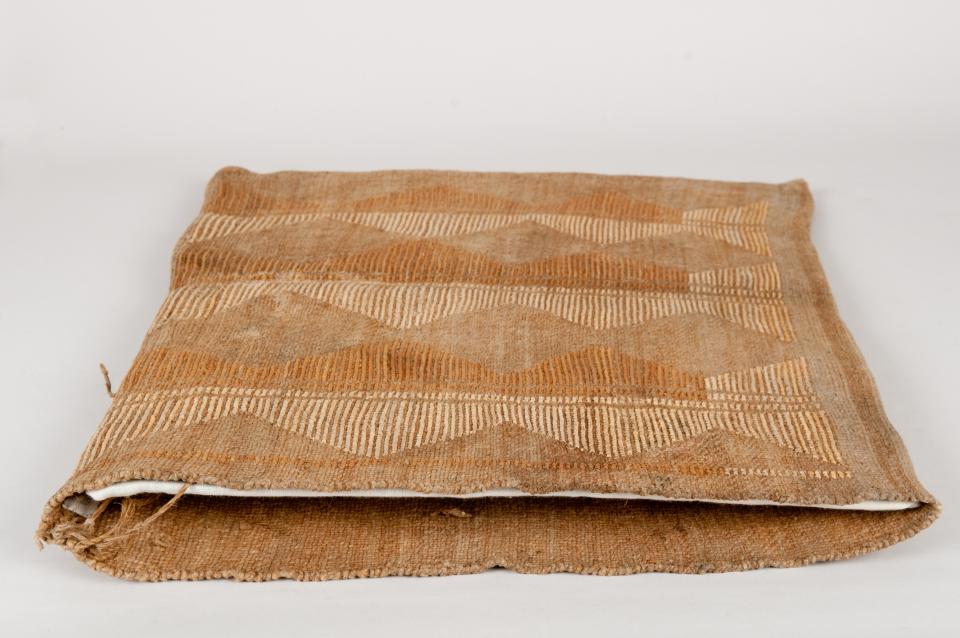 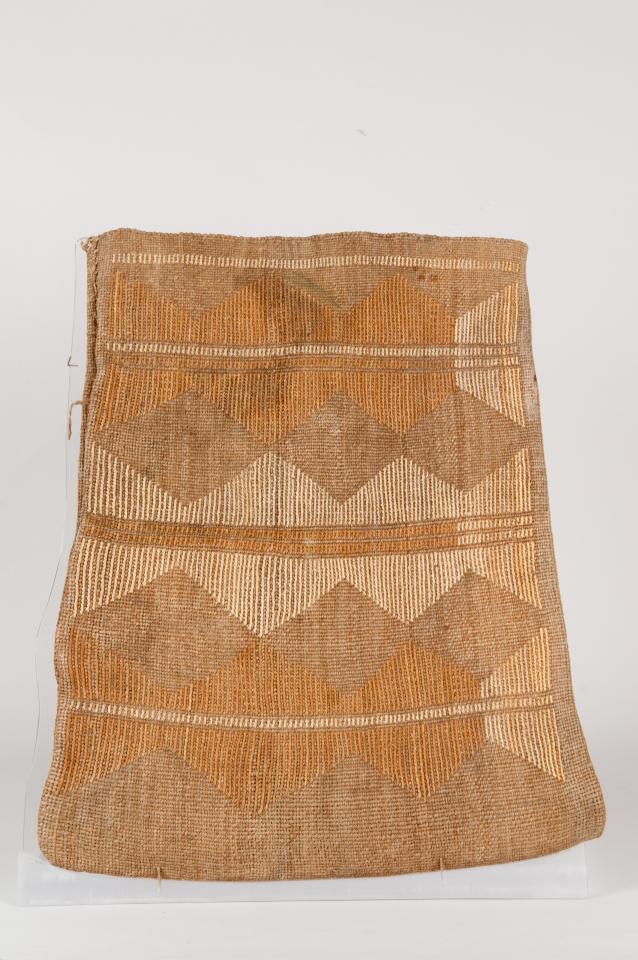 Hemp and cornhusk flat storage bag. circa 1835  Slightly trapezoid with holes the only evidence of closure. Plain twining hemp with an usual bag construction. False embroidery of dyed and undyed cornhusk. Both side horizontal three triple-hourglass figures. Design area alternates between one lane with false embroidery and one lane unembroidered.

"I know that when people made these types of bags, they made them oftentimes for utilitarian type uses. But they also made them for ceremonies. And to describe those ceremonies, one might talk about like weddings. Where a wedding trade was something that was done between the family of a young man and a young woman that were coming together. And what that symbolized was that union was not just those two as a husband and wife, but it was also the union of families. Because sometimes those marriages were arranged by the family to solidify access to different resources. And thus those individuals, they were kind of almost esteemed in a different regard than the other types of unions. Because those individuals were basically living a life of servitude to their family. And oftentimes those were implemented in terms of solidification of a relationship to other families and other resources, that type of thing. But they always knew that’s what they were doing.
And so these bags were made for the express purpose of putting in dried cutmiss (camas) or dried roots, berries, that type of thing. They would be filled up and then they would be sewed along the top so that they were just bulging like that. And then they were putout as a part of that wedding trade where the families would get together and they would put out a bunch of things for the family to take. And then the other side of the family would reciprocate. And so that was called the wedding trade. And that was the thing that really solidified a union.
And of course there were the other types of union where a young man and a young woman just found themselves on their own and thus got married. But that was pretty significant. Because that’s what it did for me was when I saw that bag for the first time in reality, that’s the first thing I thought of was like wow, man, that was probably full of cutmiss (camas) at one time and just thinking about the amount of work that goes into making cutmiss (camas). I mean, you’re out there in the hot sun. You’re digging. And you’re filling up bag after bag with cutmiss (camas). And then you’re baking it for three to five days on top of that. And then you’ve got to gather the firewood, you’ve got to gather the rocks. You’ve got to put the pit together. And then you’ve got to take everything out. And then you’ve got to dry those roots for the express purpose of this ceremony that’s taking place. And then you’ve got to trek the roots to the ceremony, and then give them away to family. I mean, that’s just a tremendous journey!"

“The decoration of the bags reflected particular family designs. The Nez Perce employed the bags for storing edible roots or bulbs “during harvest time and for winter storage.” The bags would also be used for “ceremonial events, such as wedding trade, burials, or feast gatherings and ‘giveaways’ during memorials of a deceased member of the family village, or Tribe." Allen Slickpoo Sr. 1995