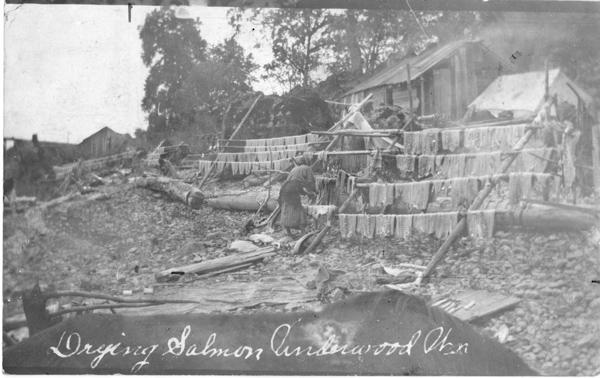 A photo of Yakama women and racks of drying salmon.  There is also a cabin to the right rear of the image and trees in the background (1912)

Indians Drying Salmon: Underwood, WA is a traditional fishing village used by many of the Columbia River tribes and bands. The woman would clean and cut the salmon into very thin pieces for drying. The large log poles would be used for cleaning and cutting these would be share by the other families in this picture. The fish would be stored away for winter and used for ceremonies throughout the year. Also notice the rocks above the drying racks; they have petroglyphs of symbols and animals. Jolena Tillequots

Our Brother Salmon was one of the first Animal People to dedicate his life to the Human People who now belong to the Yakama Nation Reservation.  He is given thanks and respect at first food feasts held in reservation longhouses where the Waashat honoring ceremony is given.  After this initial thanking, Yakama families can then fish the rivers for their individual subsistence; all according to set fishing seasons determined by reservation studies on numbers of fish runs.

Celilo Falls, located between Biggs and The Dalles in Oregon, was once an important trade center.  the Falls were located near the last quarter of the Columbia before it fed into the ocean.  Native people came from the north, south and east to live for months trading their foods, horses, clothing, hides, utility items. The big trade was also a time of celebration and introduction.  Marriages were arranged, racing, gambling and other forms of contests were held.  All forms of societal ceremonies and intertribal activities were held.

The Falls were drowned in 1957 by the Corps of Engineers building another dam on the Columbia to be used for electrical power.  There is a film of the last salmon feast held at Celilo Falls before it was flooded.  The Commission has an education presentation and the Yakama Nation Library has three films about fishing and the Columbia River that patrons can request to watch.

Fishing remains one of the original subsistence gatherings handed to the Human People by the Creator.  The large number of dams on the Columbia River with their fish ladders have had a depleting effect on the salmon runs and Plateau tribes work hard to keep the fish runs healthy.  Vivian Adams, Yakama

Salmon conservation/restoration is practiced through unity by Plateau Tribes in an organization called Columbia River Intertribal Fish Commission.  These offices are located in Portland, Oregon.  Various members from the Plateau tribes may serves as leaders on this Commission if so elected.  The Commission performs biological studies researching the health and growth of salmon runs and also provides enforcement of fishing laws agreed upon by the tribes for salmon gathering on the Columbia River.

The Yakama Nation has a Fish & Wildlife Program with biologists and technicians who study fish runs to determine health and growth of the salmon.  They also have a tribal council committee of elected officials who make tribal laws to protect, restore and preserve salmon runs.

Ceremonial fishing is done by Yakama fishermen through a special approval process.  Yakama reservation families can receive frozen salmon brought to the reservation by river fish hatcheries after research has been performed.

Historically fishing wiers (small traps),  were made to be used on creeks that led to reservation rivers that then emptied into the big Columbia River.  Villages, families and individuals fished these areas for daily food during the seasonal gathering and met at the Big River, N Chi Wana, the Columbia River at Celilo Falls, to do serious dip net fishing to build food storage for use during the cold season. Many families have fished at traditional family sites along the Columbia River for centuries and continue to use these family sites for fishing today.

Older fishing methods included carved bone hooks  attached to hand woven Indian hemp fishing lines as well as large hoop nets also used for catching fish along the banks of the river.  Gill nets, or dip nets have always been a fishing tool.  These are big "hoop" nets of hemp string woven onto a circular bent willow which is then attached to a long straight wooden pole.  This kind of fishing tool is used while the fisherman stands on a wooden fishing platform anchored along the rocky cliff sides of the rivers.

Today many fishermen also use large nets pulled by along in motor diven boat.   Seasonal fishing days and times are determined by fish biologists of the fish commision and community tribal leaders on reservation rivers and on the Columbia River.  To legally fish fishermen must list their helpers, and receive tags for their nets.  Each Plateau tribe has set up their fishing regulations which become their tribal law and they abide by the conservation advise from the fish commission.  Vivian Adams, Yakama

Many animals share the reservation lands with the Plateau people.  On the Yakama Reservation we have a variety of birds, fish, plant eating animals and carnivore animals.

We have fish and wildlife tribal programs who monitor the health and growth of these other beings.