A Literary Society Group at Chemawa 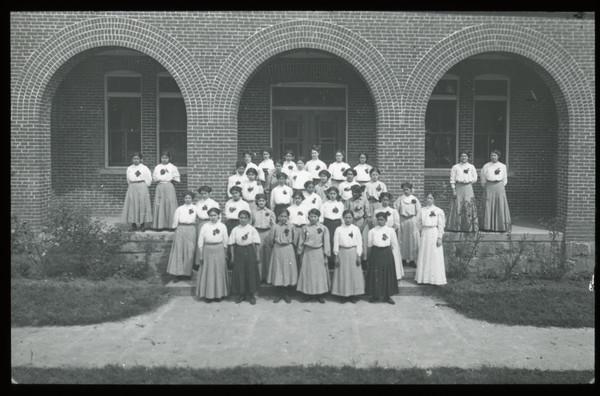 Photograph (lantern slide) showing unidentified members of a literary society at the Chemawa Indian School, circa 1909.

When I worked at the High Desert Museum as Curator of Native Heritage, I interviewed several elders from the Plateau reservations of Washington, Oregon and Idaho about their boarding school experiences. Many were removed from their homes under threat of parental (or grandparents) being jailed if families didn't comply with the new law to educate Indian children into being "civilized." The purpose of the schools was to teach the Indian children how to appear and act more like a white person. Their manner of dress changed from hides to cotton would then be proper, they would learn how to speak English and only English, and their class were created in consideration to the jobs they would hold as adults. With this newly learned lifestyle, Indian children would become the civilized Indians leading their families into becoming acceptable enough to be deemed recognized citizens of the United States. Vivian Adams, Yakama

A Literary Society Group at Chemawa: My maternal grandmother was the first of my family to attend boarding school at Chemawa. My mother and several of my dad's sisters went to Chemawa when they were teenagers, circa 1930s. So they entered the boarding school a little later in life than other Indian children.It seemed to me that my grandmother taught her children (my mother) to be ashamed of their traditional cultural ways. And my older aunts may have brought that attitude home to their baby brother (my dad). In our home we were never taught our language, never went to social gatherings like pow wows, and never regularly attended longhouse activities. The only time my sisters, brother and I came into contact with tradtional activities is if my grandfather (my father's dad) held a lighting, a Shaker religion medicine gathering, or we attended a longhouse wedding. We spoke only English in our home but sometimes my grampa would talk Sahaptin to us during our lunches at his big house over "at the barn." Gramma Bessie, grampa's second wife (my dad's mom was deceased) was a very traditional woman and she quietly prepared medicinal tea for us when we had head colds, or made something like hair gel for us to use when mom braided our hair. Both my grandfathers took to farming and my pushsa (dad's dad) became a prosperous cattle rancher too. So we grew up tending cattle and horses, weeding-picking corn, stacking wheat, baling hay, picking cherries/apples/pears/plums.My grandparents and my parents were greatly influenced by their education and what they learned and how they lived affected us all. I loved them all dearly, I just wish that would have been what they taught us about being Indian, our language, our medicine aka religion, and the people we never knew growing up so separate from the rest of our reservation families. For the past couple of decades I have been trying to reclaim my culture and encouraging my familiy to do the same. As a race we have so much to proud of. Vivian Adams, Yakama