Louis Mann and his dry flume 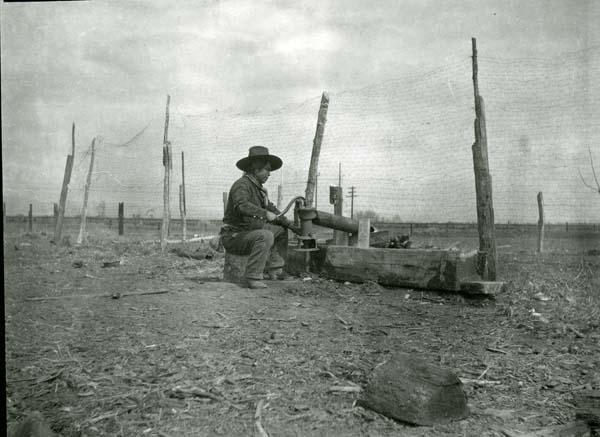 A black and white photograph of Louis Mann and his dry water flume, 1915.

Louis Mann and his dry flume: Even though Mr. Mann and his fellow Indian farmers tried to live by the laws made by white men for white men; they were troubled by lack of water, theft, and trustee neglegence. At every turn they were being robbed: of their water, their livestock, their lands. And yet, any complaint to the government was never resolved. Vivian M. Adams, Yakama

Indian landowners who became farmers and ranchers had very difficult times when overcome with issues that were neglected, ignored or given advice clearly supportive of the white landowner. Mr. Mann even stated that before, under the watchful care of James H. Wilbur, times were better and the Indian better protected from government corruption and white man greed. It was difficult to understand why there was one way to treat the white man and another way to treat the Indians. Had their leaders not spoken straight words at the treaty negotiations. Didn't both the white man and the Indian agree to live on good terms with each other? Why then did the white man say one thing and do the opposite? Why were the white man's laws good for the white man but bad for the Indian? Why couldn't the white man keep his word? Were his words empty and would the future of Indian children lie in the path of continued mistreatment and lies by the Great White Father? The double standard of the government's laws when it came to justice for the Indians was birthed many years in the eastern part of these United States, and I am sorry to say, continues to this day. But Indian people are quiet and they tend to suffer quietly and attempt to mend torn words as best they can by sending their learned warriors into the white man's courts to battle for our treaty rights. How and will this double standard ever be resolved; the double standard of treatment between the government and Indian? When will justice in the U.S. truly be balanced, and served with straight, heart felt words and deeds by the white man like Governor Stevens promised at the treaty talks? Vivian M. Adams, Yakama