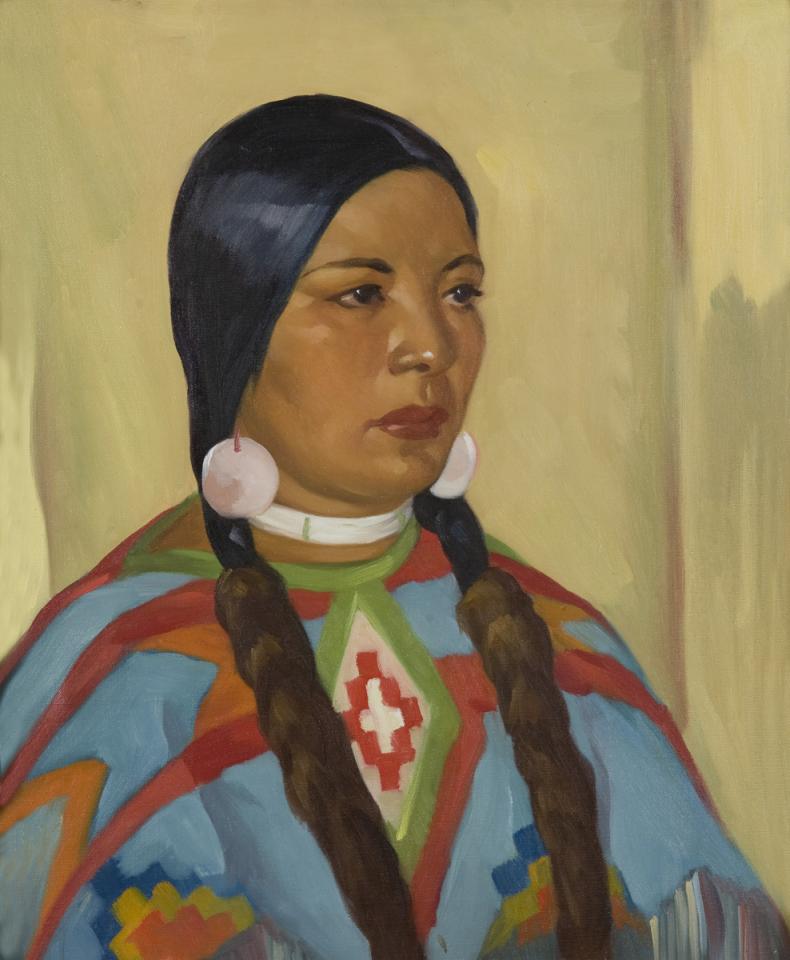 A photograph of a portrait of Melissa Parr (Reflection at Dawn) painted by Worth D. Griffin in 1935

Portrait was painted as part of a commission for Washington State College and the Board of Regents.

The following was recorded from the provenance on the painting’s back:

Melissa Parr was born on the Umatilla Reservation in 1911. She is a descendant of Chief Joseph on her father’s side; she has a Cayuse mother. She is the niece of Chief Red Hawk and was educated in the schools of the Umatilla Reservation, yet the tribal customs peculiar to her people interest her far more than any of the activities of the white race. She is considered one of the beautiful Indian women of her tribe. For three different years she won the first honors at the Pendleton Roundup for her costumes and horsemanship. She is a particularly striking woman when dressed in her full regalia. Through intermarriage she has lost much of the sturdy appearance common to many of her own tribe. She is the darling of the roundup.

Parr was a full blooded Cayuse of the Confederated Tribes of the Umatilla Indian Reservation, a descendent of Chief Joseph, and a niece to Chief George Redhawk. Her Indian name was Talawetonmi, “Reflection of Dawn” in English. Recognized as a tribal beauty, she won the American Indian Beauty contest several times. In 1932, she was the first Indian woman selected as the Queen of the Pendleton Round-Up and in 1973 was inducted into the Pendleton Round-Up Hall of Fame. During World War II she christened the launching of the tanker the S.S. “Pendleton.” Malissa Minthorn Winks, Collections and Research Manager, Tamástslikt Cultural Institute, Confederated Tribes of the Umatilla Indian Reservation.