Mrs. Smith and Her Literary Society Boys at Chemawa 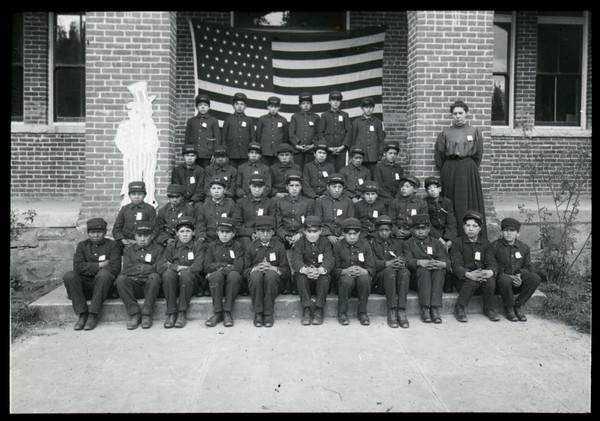 Photograph (lantern slide) of unidentified student members of the boys' literary society at the Chemawa Indian School with an adult identified as Mrs. Smtih, circa 1909.

The boarding school at Chemawa near Salem, OR, was built to house Indian students from mainly the northwestern states.  My mother went here for a short time when she was a teenager.  Notice how regimented the students had to be at first.  Later, the school became a bit less formal, but was very military-like; many elders told me there was a lot of marching to get to various learning sites on the campus.

Another Chemawa student told us at the Yakama Library that they would be taken on trips to the ocean beaches of Oregon.  The trip would be like a picnic and would be a one-day travel.  She very much enjoyed the outings and got to visit some of the touristy sites along the Oregon coast that are so popular today, all while the state was relatively unknown for its beauty of flora and fauna. Vivian Adams, Yakama