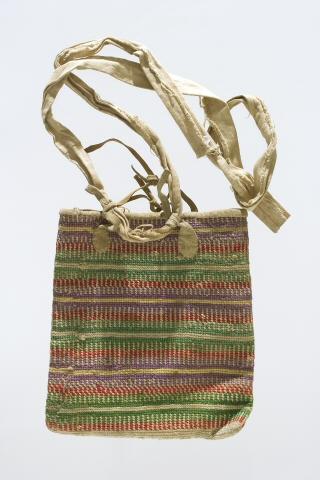 This bag looks like hop string weft and yarn and it has three panels on it. I don't think it’s too old because of the colors and the hops string I would guess is the 1940s, it's twine. This is either a carrying bag or to wrap around the waist. Elaine Emerson

This one old lady a cousin of my Mom’s, when I was a young girl, they told us that the designs had three panels because it dealt with Indian folklore. Like with coyote, he went up to the sky to get the fire. He couldn't get back down himself so he asked spider and she let him use the ropes to go down from the sky. She told him when you fall and stop don't open your eyes, wriggle around and wriggle around and you'll fall again, you'll do this three times, the third time you wiggle around and then you won't wiggle any more and open your eyes and you'll be back to Earth. That’s why they use three panels. Elaine Emerson