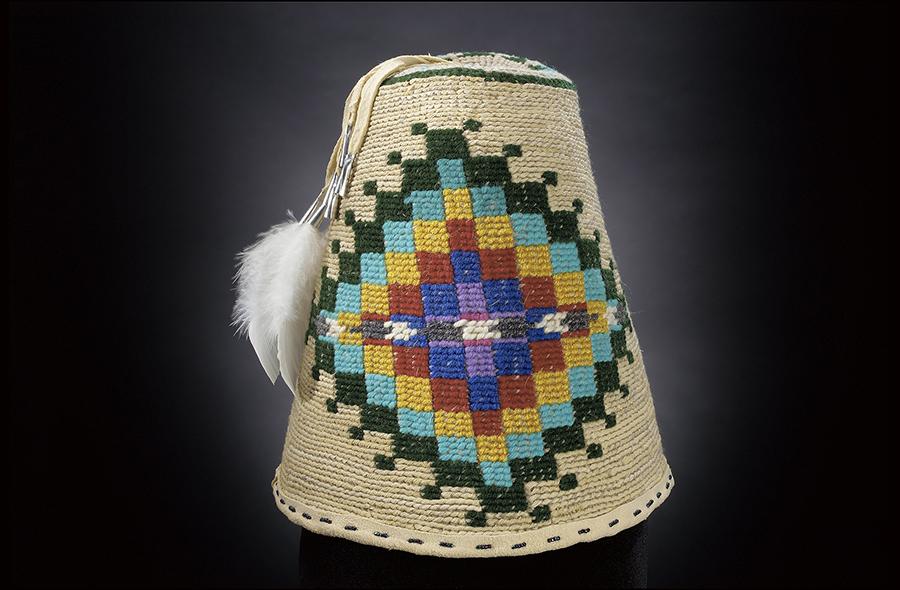 Hat made of twined corn husk and yarn in multicolored geometric design, lined in fabric, with leather, metal and feather ornament at top.

[Myra Johnson-Orange]: Yeah, they were used specifically for people of honor, people who were dedicated and well known and were assigned to be root diggers. Nowadays we have children that wear them, and children never use to wear them because it's kind of an honored position in regard to gathering our sacred foods. So if this is in the Smithsonian, a real good friend of ours and relative probably made this hat; I'm thinking it's her making. We see people's work and we know whose it is so that we can define whose it is pretty much. And if it's over there it's a real honor to be there and I think she did tell me she had a hat over there. She's well-known over the Northwest for making hats such as this. And that's just from the Sahaptin people; they are pretty much the ones that wear this hat.

[Rosie Tom]: Yes, that hat is a ceremonial hat. They also, like Myra said, use it for dancing. And the different designs will depict which tribe they probably come from, but this is more of a contemporary style, and a lot of them have their own designs on there. The size, and the shape of the hat. And like Myra did say, there is a selected few people that were gatherers that would wear them. And your mind has to be clear and have a good heart for doing that. There's a lot of things that go in - more than you probably would know - that go into a person that wears that hat that gathers the ceremonial foods. The preparation for what it takes to do that. Like she said - like they both said - that's made by a lady in Warm Springs.

[Myra Johnson-Orange]: Yeah, and usually when you get that role of being a sacred food gatherer, it's pretty much handed down from family and they train their young ladies to be that. Because like Rosie said, you have to have a good heart, you have to have a good way with people. Because you can't handle our sacred foods if your heart is not good. And you can't handle our foods if you're mad or sad, or especially if you're sad, because we don't want our foods to become that. Because what you're feeling in your heart and you're doing those things that’s going to possibly feed maybe a lot of people, maybe your family. You want them to feel good, too, so you feel good when you do that work. And that's why I say this hat is a hat of honor and just the people who can carry themselves well wear the hat. The other two tribes of the Confederated Tribes of Warm Springs also have hats that they have that might be a little bit different from what you have here in this picture.

[Lepha Smith]: I know some people have been criticized, you know, for wearing them during the powwows. People can come and have somebody make them a hat like that for the powwows. But it is a sacred duty that these people - the ladies perform - that wear these hats.

[Myra Johnson-Orange]: Nowadays we have powwows where they just do everything matching. So now they even include the hat, and like Marie says it never was part of the powwow because of the significance of the hat and what it meant to the people who were the gatherers. So, I kind of agree with her that it shouldn't be part of the powwow circle but…

[Lepha Smith]: The reason I know this is because my daughter is a bead worker person, and she made a hat for one of my nieces and she's of another tribe. And she wore the hat and a gentleman from this Northwest area noticed her wearing it in the powwow, and he criticized her really bad because he said, "that's a sacred hat." And she knew that. Although it's another tribe, she does do these sacred things for her grandparents that she was criticized for. He said there was a ceremony that they go through to get these hats, but she was told by an elder that people come up here and just buy the hats to wear.

[Rosie Tom]: And the hats that are worn - sometimes they are gifted – like made out of real, the fibers. So there's a difference between the hats. This particular one that we're looking at is cornhusk and yarn, so it's kind of like contemporary but a real traditional one would be all cornhusk, or cornhusk and different bear hair or something in there. And when you go to a powwow, just to continue talking about that, because you can go to a powwow, but the emcees that are announcing, everyone knows who the selected gatherers are in the longhouses on the reservation. And at one time, like Myra said, the children were not involved because it's a female role - the ladies, women's role to be doing that. And the children are too young to understand all of the sacred parts of everything that are involved in the ceremony. But they are groomed to do that [laughs].

[Myra Johnson-Orange]: And Marie's right that there should be ceremonies to be able to move the young ladies from children to women, to womanhood. That's when you start being thought about as having that honor, because for me it's a real honor to be recognized as a food gatherer and for the tribes to honor that. Because I think - it's sad - because my thinking is we've lost a lot of the sacredness that we should be carrying on and so it will affect foods, our sacred foods... things will happen...Kind of what we have is what we call unwritten laws that are our natural laws of life. And so those things, you know, talk to us, teach us how to be, and why we should be that way.