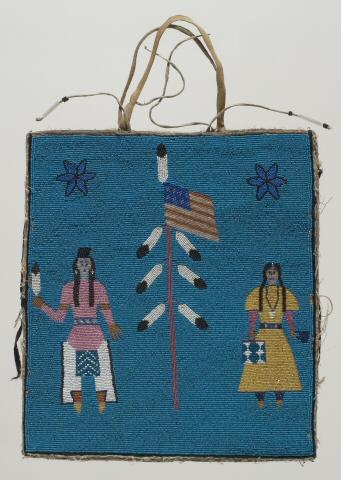 Bag front only. Fully beaded front, medium background with realistic design of a man holding a feather and a woman holding a cup with a flag staff with eagle feathers in the center, on a blue background. No edging on bag front. Buckskin handles and ties with beads., length: 12"; width: 11"

That's the feather religion and that's down by White Salmon, James Hunt or Jake Hunt. Wilfred Yallup and his mother Elsie Pistolhead would sing those songs, too. It's when they hold the feather in the right hand; W-a-s-h-u-t, or w-a-s-h-A-t. WashAt. There are three different kind of songs; Medicine, ceremonial, and the word waah-shut means the dance, and one word Washut means religion. Vivian Adams, Marlene Simlaw

The woman looks like she is bringing the man something. The beadwork is so even, except where the string gave out and it is broken up a bit. I don't know what they put in there to make the back stiff then. Arlita Rhoan

It might be feather religion people, the seven feathers there on the design. This is old, old, you just worked with what you had then, you didn't have so many beads. It is probably from when the Czechoslovakians started bringing the beads. It has to be over a hundred years old. I had a dress made with these types of beads. They believed in America, but they only have eight stars. Those are size 12s the background beads, probably. They did these bags in the winter, the long winters, they sometimes had blue horses or purple horses, they just used the beads they had. The beads on the man's belt are probably 22s the yellow ones are fifteen, so is the bag and the green necklace are 22's probably a shell. Maxine Switzler