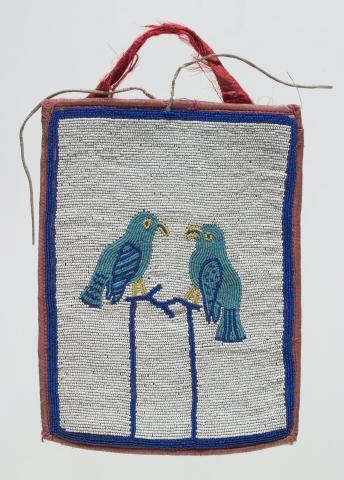 This is Coeur d’Alene tribe, though maybe it’s a Spokane married to a Coeur d’Alene because it’s listed as Spokane, but the name Daniels is clearly Coeur d’Alene. That’s probably what happened. Pauline Flett, Marsha Wynecoop

This is out of a sewing machine, see? It looks like it’s quilted. There’s also some kind of marker ribbon stuff too. It says Chap. Wonder what that means. It might have been the owner who donated it. It looks well used, See? It looks worn. They carried this, probably on the belt. You’d see a little old lady with something like that. Viola Frizzelli

Chap stands for Chap Dunnings. The Chappy Dunning collection was all absorbed and donated to the museum in the early 1960’s. They’ve had it for awhile. They had it since 1925 and then they donated it. Tisa Matheson