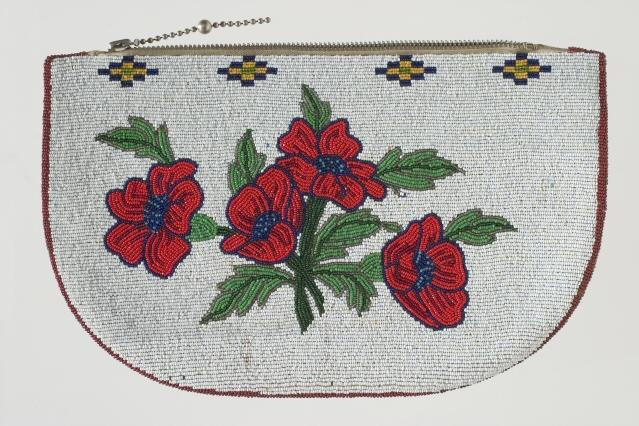 A modern, seed beaded, flat purse. It is rectangular in shape with the bottom two edges rounded. The purse is lined with green faded to beige colored brushed cotton cloth. Over this is light brown heavier, cotton canvas. The outside of the purse is covered with seed beading. The background is white beads. Both sides of the purse are covered with a large, single floral design. On one side there are three yellow flowers bordered in dark blue with light and dark green leaves and stems bordered in light blue. The top opening is bordered with a band of black seed beads that extend into three stepped traingles bordered in red seed beads. The other side of the purse has a single floral design consisting of four red flowers bordered in dark blue with light and dark blue centers. The leaves and stems are dark and light green. The background is white. At the top opening are four stepped diamond shapes in light green in the middle, yellow and dark blue on the outside. The two sides and the bottom of the purse are bordered in a band of reddish brown seed beads. The top opening has a cotton cloth, light brown and metal zipper that has a brass chain with hollow ball extension on it. The sytle of beading is called overlay. length: 11 3/4"; width: 7 3/8"; depth: 1/4"