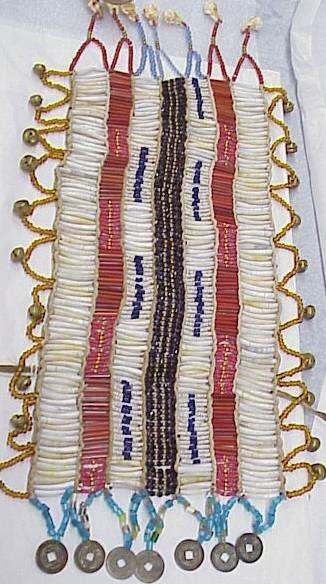 Small, elaborate wedding veil. There are two hide ties near one end, one on both sides. There are long, cone shaped shell beads, most are curved and are in two long strips on either side with two strips in the center intermingled with beads. The intermingled beads are white with dark blue in the center. There are a group of shell beads, a group of blue and white and a group of shell, it continues on. Between the strip of shells and the strip of shells and beads is a strip two kinds of rust beads. On both edges are small seed beads with a single gold in the center and a group of long, thin tube shaped beads. In the very center there is a strip of cut dark red beads with small round gold beads in the center. Along each side of the veil there is looped gold beaded fringe with a brass bell in the center of each loop. At one end there is a looped blue bead fringe with a coin in the middle of each loop. The blue beads are a transparent blue with white and clear intermingled in. At the other end is a looped beaded pattern with a single strand hanging down from the middle of each loop with a polished animal tooth at the bottom of each strand, they are pink on each end and blue in the middle., overall length: 21"; width: 53 1/4"; fringe: 4", hawks bells & coins are good luck, status symbol