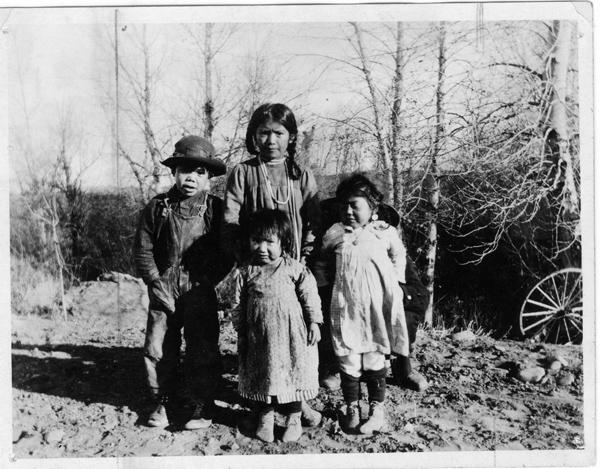 A photo of 3 girls and one boy in the center.  A wagon wheel to the right hand edge.  Bare trees in the background (1918). 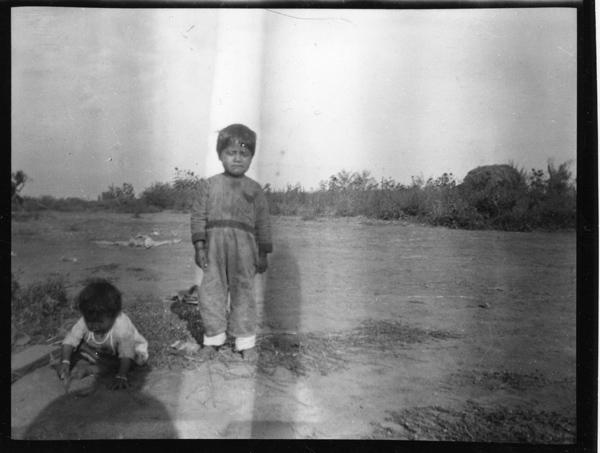 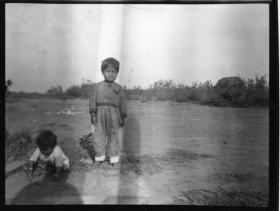 Yakama Infants and Children: These children appear as though they still live at home and have not yet been removed from their family and sent off to distant government boarding schools. The girls are wearing the newer style cotton clothing (wing dresses) and wear girls high-top moccasins. The boy wearing the hat and the tall girl to his left at about the age children were when taken away from their families and sent off to distant boarding schools. Vivian Adams, Yakama

The traditional ceremonial lifestyle of children who were made to leave their families became endangered through assimiation.  However, many Indian children refused to give up the spiritual empowerment their traditions and customs learned from their parents and families.

Today, boarding schools have become popular because of the gathering of various tribes from throughout the U.S.   Indian students opt to go to these schools to continue highschool into junior college or college and universities.  And, they have the freedom to return to their families whenever they choose, including having the freedom to practice their traditional customs.  Vivian Adams, Yakama

One Yakama elder told me how she and her sister was "discovered" at their family home by an Indian health nurse who regularly toured the reservation visiting Indian families.  She reported to Indian agency officials and her aunt (the only one of their family who owned a vehicle) had to immediately pack them up and take them to Chemawa Indian School in Salem, Oregon.

Her little sister who was four, turning five was also required to go off to school.  The aunt who drove them to school was immediately dismissed because the boarding school matron said it was too disturbing and difficult to get the children to cooperate with school regulations if the family members hung around too long.

She remembered her little sister crying all night in the first floor level of their dorm and she would sneak down stairs to hold her sister to calm her so she could sleep.  Then in the early morning hours she would sneak back upstairs to her own bed.

She said she had run away from school several times and because of this, her last attempt was successful because the school didn't want her back because she was so uncooperative.  I don't know how her little sister fared.

Another elder told me when she went off to boarding school, she didn't have any parents and when she met up with other orpahned children from her reservation, they stuck together building their own family in the boarding school environment.     Vivian Adams, Yakama

Boarding schools were made in the late 1800s and early 1900s to assimilate Indian children into the white lifestyle.  It was hoped by the white people that the Indian children, once removed from their families would forget their traditional cultural customs and become "white," and civilized.  Children as young as five years old were taken away from their parents and sent to school.

Usually a government official, like a health nurse who traveled to inspect Indian families on the reservations, would report to higher officials if Indian children were still living at their family homes.  If so, the children were immediately removed and sent off to boarding school.  If the family didn't comply with this law, they were jailed until they cooperated.

Many Indian children would run away from school because they missed their familiy and their usual way of life.  Many Indian children could not return to their homes for the long holidays if they lived too far away and year round spent their time at the boarding school.

Daily life at boarding schools was regimented.  Indian children marched to breakfast, to class, and back to their dorms after classes.

Boarding school children did participate in learning musical instruments, singing in  choirs, and participating in various school sports like tennis and baseball.

Rites of passage ceremonies on reservation lands were held less often because of limited travel, limited resources and inaccesability to usual and accustomed places of gathering.

Many families do strive to keep these rites of maturity in place as best they can in  their  contemporary reservation life ways.  Vivian Adams, Yakama

New games became a part of boarding school children.  They participated in many of the sports white children favored, like basketball, baseball, tennis, track, and swimming.

Stick games only attracted Indian youth as they moved back into living at home attending public schools continuing the contemporary-traditional life ways of their parents and families.  Vivian Adams, Yakama

Many hospitals today allow Indian families to bring in their "medicine" foods, the regular foods gathered throughout the various seasons, to appease and comfort the elders or Indians who request those foods.

Powerful Indian healers are still called upon to assit an individual to better health via commication in the spirit world.  The Indian Shaker Church has many healers and healing ceremonies.  Vivian Adams, Yakama